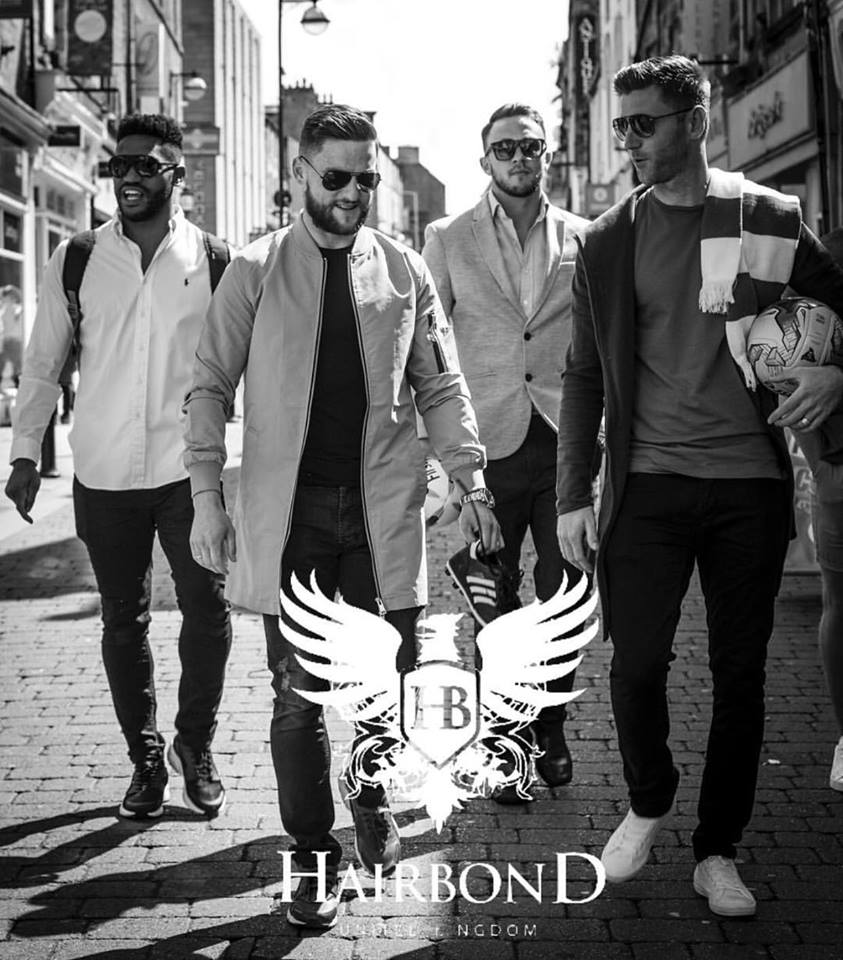 How to Style your Hair like a Professional Footballer

If you’re going to style your hair like a professional footballer, you’re going to need to make sure you have the right professional products at hand to begin with. Hairbond is widely recognized as being the “Premier League of Hair Styling” and has been suitably nominated “footballer’s choice” by award winning bodies including Footballers.hair.com.

Here’s a long list of professional footballers found giving Hairbond some TLC.. we hope this will give you the inspiration you’re looking for..

Jamie Vardy, Christian Fuchs, both International players, as well as Premier League winners season 2015-2016, upload this picture straight from the dressing room showcasing their adoration for the Hairbond Shaper Professional Hair Toffee. Defender or striker, the Toffee clearly works wonders. Now you know how he styles his barnet when “Jamie Vardy’s having a party”.

The England number ONE couldn’t wait to get in on the trend when he went to his barbers and they were exclusively stocking Hairbond products, at Mr Tillys Barber Shop found in Newcastle. Pickford reportedly “filled his boots” and took a selection of products away to play with. We have wondered if he’s thought about using small amounts on his gloves at times! Pictured Hairbond Texturiser professional hair cream and Hairbond Distorter Professional Hair Clay.

Another England International took to Twitter to promote Hairbond brand when Phil Jones took these pictures of what he was taking to the England national squad.

Back in 2014, Mignolet famously signed as Hairbond’s second major brand ambassador following the England cricket captain Jimmy Anderson the year prior. Hairbond ran signed prize competitions and then launched globally as international Liverpool fans and football fans alike demanded to see what all the fuss was about. Here he holds a signed HB Moulder Professional Hair Shaper.

It seems the 23 year old midfielder took to social media to play his part in the Hairbond footballers promo craze. Firmly a fan favourite at Spurs, we wondered how many spurs fans had to buy one after seeing this on Twitter?

Yet another Premier league midfielder shown promoting the Hairbond Shaper Professional Hair Toffee product. 24 year old James Ward-Prowse plays for Southampton and also has caps for England. Makes you wonder whether England have a Hairbond styling station in the dressing room.

Jay Rodriguez, clearly another fan of the toffee! Shaper Professional Hair Toffee is proving to be a bit of a Hairbond favourite it seems! We noticed Jay more recently sports a longer Zlatan/Andy Caroll esque style but no doubt still uses this strong hair shaper to keep everything in place.

MFC 2018 squad including Dael Fry, Ben Gibson with Stewart Downing, Adam Clayton, George Friend and Connor Roberts with Patrick Bamford. This squad finished in the top third of the Championship league table that season. We wondered, do they get better results when their hair is on point? We uploaded this photo on our @hairbond Instagram account, go give us a follow https://www.instagram.com/hairbond/?hl=en

This time Hairbond appear at Championship side Blackburn Rovers’ training ground. Pictured Scottish International Charlie Mulgrew, gaffer Tony Mowbray and Blackburn legend and U23 coach David Dunn. We are proud to take out some time to visit players, coaches and offer them hair styling consultations.

Trip to Newcastle United invitation from captain Paul Dummett. Great bunch of lads and they really gained a lot from some pre-styling education in order to add extra volume, strength and structure to their styles for when they are on the pitch.

Before Conway made his recent move to Salford City he played for Championship side Blackburn Rovers and back then in 2017 he featured as a stylish male model in an official Hairbond photo shoot which took place in the historic city of Lancaster, Lancashire; the birthplace of Hairbond.

Love footballers hair styles? Paul Gallagher of PNE was the other footballer to take part in Hairbond Sportsman themed photoshoot (see above). As a big fan of the products, Gallagher couldn’t turn the opportunity down to get involved. His favourite product is the Shaper Professional Hair Toffee. Something you will see a lot more of..

After hearing about the footballers/Hairbond trend Blackpool players took to Twitter to show they hadn’t missed the boat either. We found this on Blackpool’s Twitter account. Clearly had to try that Hair Toffee everyone’s been talking about.

Shamrock Rovers midfielder Jack Bryne, another player previously at Blackburn Rovers who took to social media to show off his love for the Hairbond Mattifier Professional Hair Cement.

Footballers hair products! Michael Owen has the ninth-most goals scored (150) in the Premier League. Now retired but happy to join the promotions via Twitter advertising Hairbond to his 3.8m+ followers.

Clearly it’s not just for the footballers hair! LUFC management and coaches are also all over it, looking good both ..on.. and at the side of the pitch. Even though he’s moved to Birmingham FC, Garry Monk’s modern stylish hair style is still a fan favourite topic.

Right back and number 2, Matt Doherty signed for Wolves back in 2010, the exact same year Hairbond was launched. We found this picture online of him online promoting the 50ml sized Hairbond Shaper Toffee at what appears to be the Wolverhampton training ground.

Still on the books at Wolves, but currently on loan for Ipswich, Will Norris was also pictured at the Wolves training ground with a Hairbond 50ml toffee shaper, did they have one each or did they just pass the one round for pictures we wonder!?

Ryan Bennett is the last wolves player to upload a picture of himself endorsing the Hairbond hair toffee product.

Brentford FC goalkeeper David Raya, better late than never.. gets in on the action when we uploaded this of him in the Brentford changing rooms to our official Instagram account.

All the lads at Aberdeen FC couldn’t get enough of the toffee Hairbond, so they ordered a full box to share. Great to see them bonding over Hairbond.

The first Italian footballer we have seen to endorse the Hairbond brand but word is clearly travelling fast! A trendy goalkeeper with a classic footballers hair style.