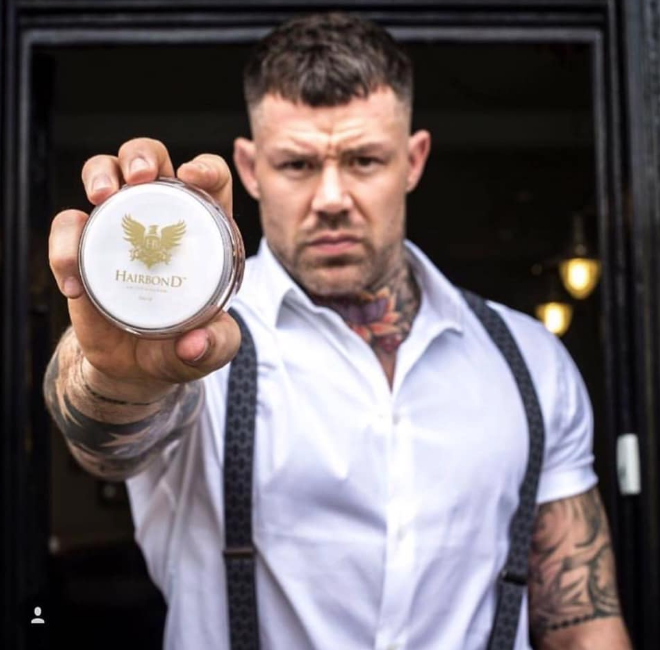 We are delighted to welcome award winning barber Jordan James as a Finest Barber and Hairbond Educator.  Jordan James.. now where might have you heard that name before?

Yes, that’s right, Jordan James is a former Wales international rugby league player who played as a prop throughout the 2000s and 2010s. His rugby career means he played in the super league for the Wigan Warriors, Crusaders RL along with the South Wales Scorpions, the Swinton Lions, the Widnes Vikings, the Castleford Tigers, the Sheffield Eagles and the Salford City Reds.

Jordan is also a respected former Royal Marine of 42 Commando, who served with the marines in Iraq and was in fact awarded the King’s Badge during his Marines training and whilst played amateur rugby league with Gloucestershire Warriors.

But today, after retiring from sports and the millitary, Jordan has adapted to life as a businessman and an exceptionally popular master barber in and around the Manchester area. After instant success with his first barber shop in the lovely area of Monton, Eccles, Jordan then opened his second shop “CULT and Coffee” on Salford’s Clippers Quay, which is just a stones throw away from Man United’s world famous Old Trafford Stadium.

CULT and Coffee is rather special compared to your traditional barbershop, whereas it is a proudly independent life-style concept store; fusing high-end barber services with exquisite coffee crafted by their own in-house baristas.  This arm of the business is located within vibrant Clippers Quay and Cult & Coffee is an exclusive destination to get a haircut, eat, drink and socialise. Cult barbers deliver full-service expert men’s grooming in a stunning, waterside location.

Whether it’s a coffee, a best selling hair styling product, a complete image overhaul or a freshen up, the top-notch team ensure you leave happy and looking your best with a style you love.

This go to destination combines the owner’s passions of precision barbering with finest coffee all under one roof. We recommend you take some time out here and admire your new look with a speciality brew.

Cult & Coffee source and serve only the best local artisan produce and their amazing house-blend is hand roasted at Manchester’s very own Ancoats Coffee Company.